The event is supported by the majority of residents although the strength of the support is diminishing by a failure of Pedal for Scotland to deal with a number of issues.

The points raised at the Community Council meeting after the 2017 event are in no particular order as follows:

1. The spreading of tacks on the route was reported by participant cyclists but no action was taken to clean up the road such that subsequently a number of cars and other road users suffered punctures.

2. The information appearing in various media was inconsistent leading to confusion regarding which routes were to be closed and which were not. Some descriptions on the Pedal for Scotland website were misleading such that roads marked as closed were open. It was suggested that a definitive large scale map be printed in all media outlets.

3. Signage on roads prior to the event was confusing perhaps resulting from signs being put up in the wrong place. 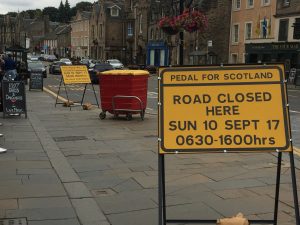 5. Displacement of traffic onto minor roads leading to high levels of traffic on lanes with a number of drivers being lost.

7. The tennis club took the initiative to sign the appropriate approaches to the tennis tournament but should they bear the cost/inconvenience.

8. Closing the road at Linlithgow Bridge meant that the approach to the town from the west was completely shut.

9. Visitors to the town were turned away with no help regarding alternative routes to their destination.

10. Many businesses were shut for the day or closed early including cafés.

11. Early closing of roads meant that people returning from a night out late Saturday or early Sunday morning were inconvenienced.

12. Advice to residents to move cars to a location off the route could not apply to many elderly drivers.

15. What is the benefit to the Linlithgow community?

16. West Lothian Council makes a decision regarding road closure based on a police recommendation. The police decisions are made in Glasgow by people without local knowledge.

A feedback session with Pedal for Scotland will be taking place on 24th October 2017. We are looking for more suggestions and ideas from both participants and residents to add to the above points. Please make your points before 20th October at the following link:

Pedal For Scotland – Suggestions and Ideas